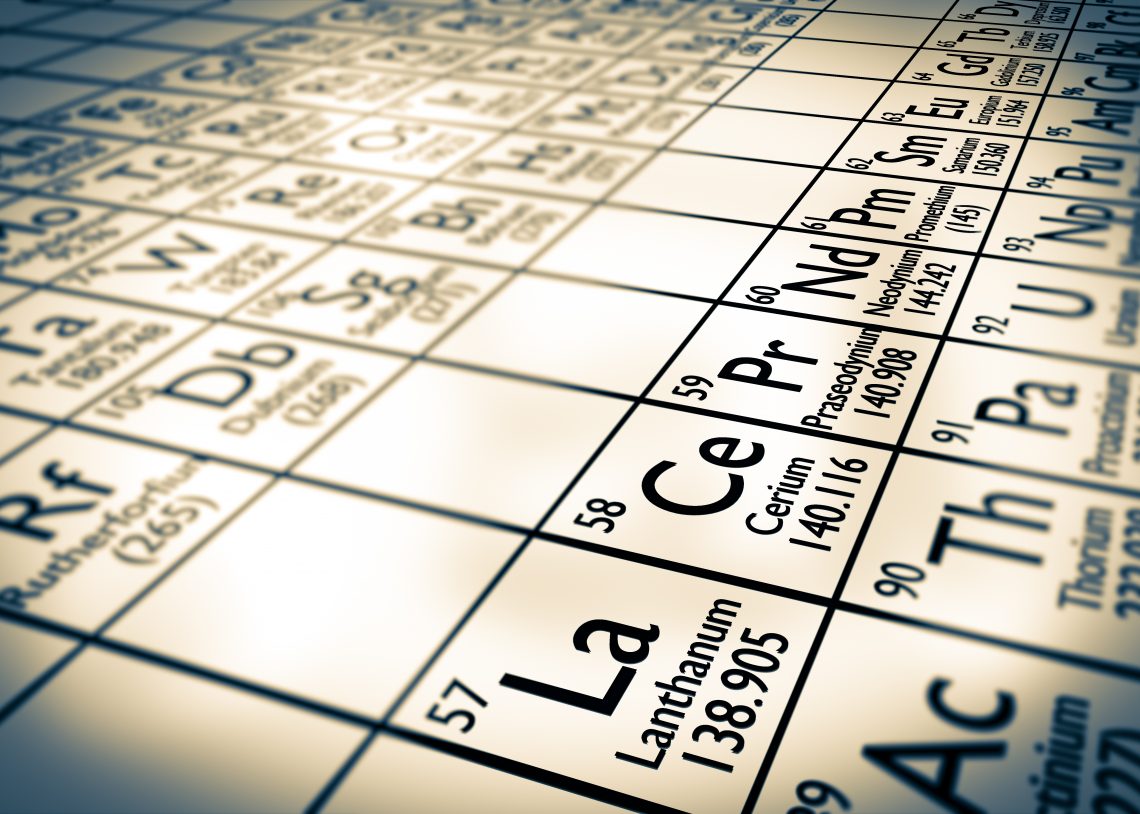 Rare earth (RE) materials are crucial elements in many modern technologies, such as smart phones, televisions and monitors, hard drives, electric vehicles, and many others. The rare earth industry benefits the economy across the globe with its extensive supply chain and applications.

Rare earth materials have also played a pivotal role in the development of state-of-the-art technologies used in the renewable energy industry. However, the use of rare earth materials has faced criticism due to price volatility and political issues surrounding the supply chain.

China has the majority of the world’s rare earth reserves with around 36%, the Russian Commonwealth nations have 19% (the Commonwealth of Independent States – post-Soviet nations), the United States has 13% and Australia has 5% of the rare earth reserves [1]. China has some of the most significant concentrations of rare earths in the world including the Bayan Obo mine in Inner Mongolia. The Exhibit shows the increase in production from the rest of the world as competition for rare earth oxide (REO) mining and supplying increases. 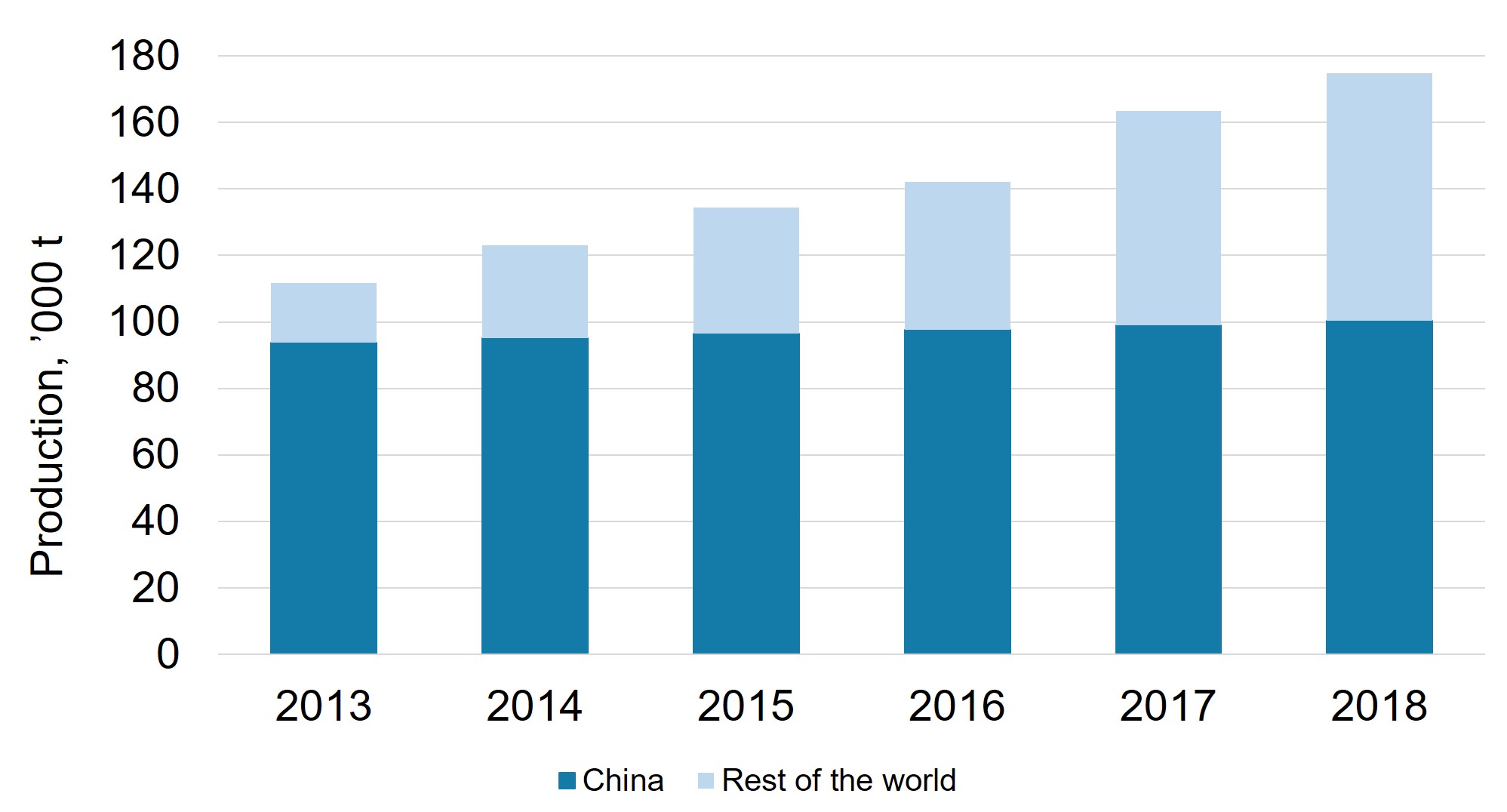 From 2006, China used to levy duties and enforce quotas for the export of the rare earth elements. However in 2010, dispute arose when the Chinese government reduced its export quotas by 40%, sending the rare earths prices in the markets outside China soaring. After a ruling by the World Trade Organisation, it was concluded that “no one country can hoard its raw materials from the global market place at the expense of its other WTO partners” (said EU Trade Commissioner Karel De Gucht). As a result, the price reduced, but the market is still heavily reliant on imports from countries such as China and so significant price rises are still a possibility.

Leading manufacturers of large modern wind turbines, such as Siemens Gamesa Renewable Energy and MHI Vestas Offshore Wind, use permanent magnet generators based on neodymium-iron-boron (NdFeB) in their advanced offshore wind turbines. To reduce production costs and improve the performance (particularly for higher temperatures), some neodymium (Nd) is substituted by other rare earth elements such as praseodymium (Pr), dysprosium (Dy) and terbium (Tb). The total rare earth element content of a NdFeB magnet is typically about 32% by weight, with Nd and Pr typically accounting for about 30% and heavier rare earth elements accounting for about 2% weight, depending upon the grade.

The use of permanent magnet synchronous generators allows for more efficient and reliable operation compared with conventionally wound rotors that were subject to frequent slip-ring/brushes failures and losses. The downside to such technology is the high capital cost, with magnet prices ranging from typically €50 to €100 per kilogram. For large machines (especially direct drive) that require several tons worth of permanent magnets, this can lead to very expensive projects. Huge savings in operations and maintenance requirements offset this large upfront cost as the higher the reliability, the lower the failure rate and so the wind turbines with permanent magnet generators typically offer high availability compared with DFIG (doubly-fed induction generators).

The assembly process of large permanent magnet generators can be challenging, with extremely strong magnetic fields acting on one another. The magnets themselves need to be treated for protection against corrosion and fixed securely to the rotor (depending on the technology) to avoid becoming loose and damaging the machine.

Due to the increase in global demand for rare earth metals, the potential to recover spent magnets is becoming more widely considered [4]. The lengthy process involves demagnetization (by heating), crushing and roasting, followed by a leaching process and a separation method before a final roasting to produce a mixed rare earth oxide. With so many hundreds of thousands of tons of rare earth oxide being produced and manufactured into products each year, having recycling methods in place is a valuable contribution to keeping the costs of the materials low and maximising the use of the rare earth elements.