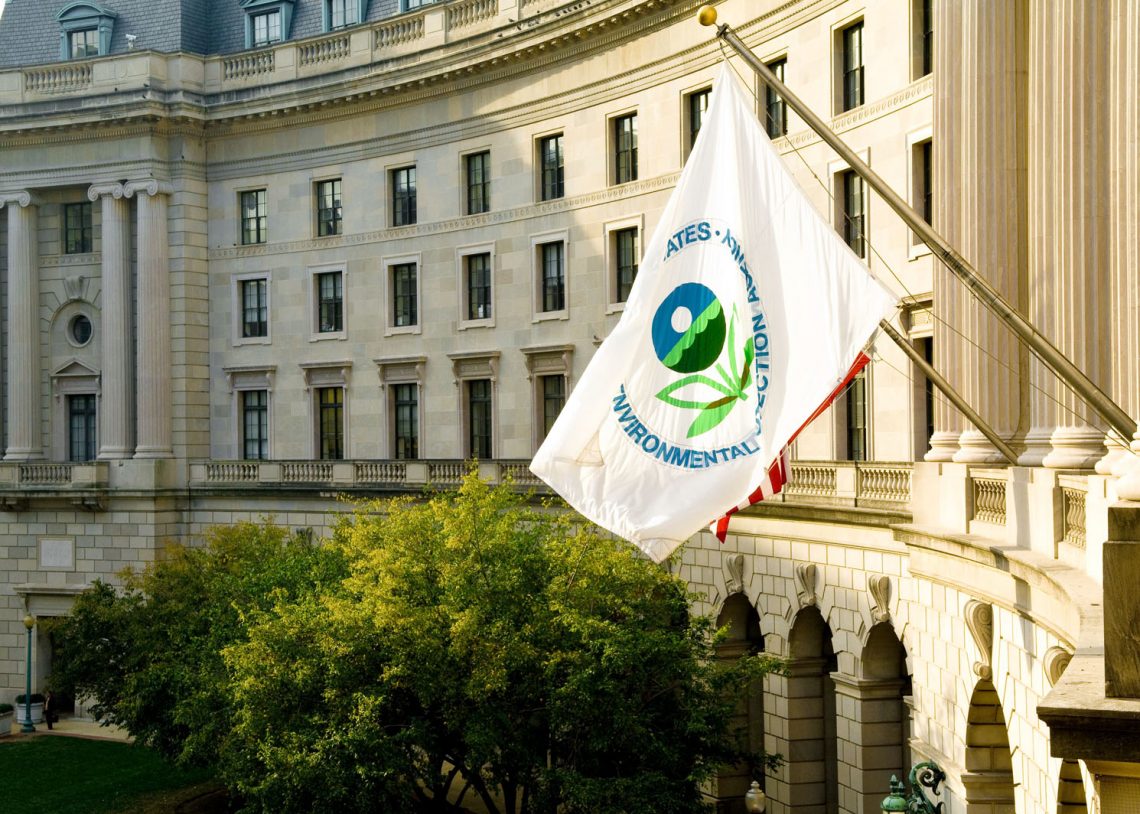 On June 30, in the case of West Virginia vs. the Environmental Protection Agency (EPA). the US Supreme Court struck down the EPA’s Clean Power Plan, limiting the agency’s authority to cap CO2 emissions to address climate change. The decision will significantly inhibit the EPA’s ability to limit Greenhouse Gas emissions from the power sector and is likely to impede the United States’ goal of decarbonizing the electricity markets by 2035.

The decision was a blow to many US citizens concerned with climate change and advocates of clean energy. The mainstream media broadly covered this as a major set-back. However, there are many reasons to be hopeful, as demand, market forces, higher efficiencies and cost reductions in the renewable energy sector are driving unprecedented growth and deployment in the United States without EPA mandates, and the same trends are occurring worldwide.

In the United States, more than 6,619 MW of wind, solar and storage was installed in the first quarter of 2022 alone, according to the American Clean Power Association (ACP). This was the most capacity ever installed in a yearly first quarter. Solar and wind were nearly equal with 56 new utility-scale solar projects coming online in 2021, for a total of 2,997 MW. Ten new wind projects came online, totaling 2,865 MW. Finally, the industry installed 24 new battery storage projects with a total capacity of 758 MW/2,537 MWh.

Renewables supplied a record 24.5% of electricity in the United States through to April, versus 21.6% a year earlier, with the sector on track to exceed forecast performance for 2022, according to the latest figures out of the Energy Information Administration (EIA). The agency forecasts that renewables will produce 22% of the nation’s power in 2022, up one percentage point from a year earlier. It estimates wind will provide 9% and solar 4%.

Globally, the news is equally encouraging. Almost two-thirds or 163 GW of newly installed renewable power globally in 2021 had lower costs than the world’s cheapest coal-fired option in the G20, according to a report released July 2022 by the International Renewable Energy Agency (IRENA).

The global weighted average levelized cost of electricity (LCOE) of new onshore wind projects added in 2021 fell by 15%, year‑on‑year, to USD 0.033/kWh, while that of new utility-scale solar PV fell by 13% year-on-year to USD 0.048/kWh and that of offshore wind declined 13% to USD 0.075/kWh, according to IRENA’s study.

Notably, those falling prices were despite rising materials and equipment costs. Those rising prices are not stopping developers around the world from bidding into power and renewables auctions at unprecedented prices. Witness in offshore wind, where much of RCG’s advisory work is intensely focused and covered in the recently released Global Offshore Wind Annual Market Report (see GRIP).

In the United Kingdom, the recent CFD AR4 auctions in early July this year resulted in 7 GW of offshore wind capacity contracted for upcoming builds at electricity strike prices of GBP 37.35/MWh in 2012 prices, approximately GBP 47.06/MWh (USD 56.57/MWh) in today’s prices. That is cheaper than most onshore wind is contracting for in the UK, US, and elsewhere globally. RCG compiled the graphic below, which shows a steady march downward when contracts are awarded. 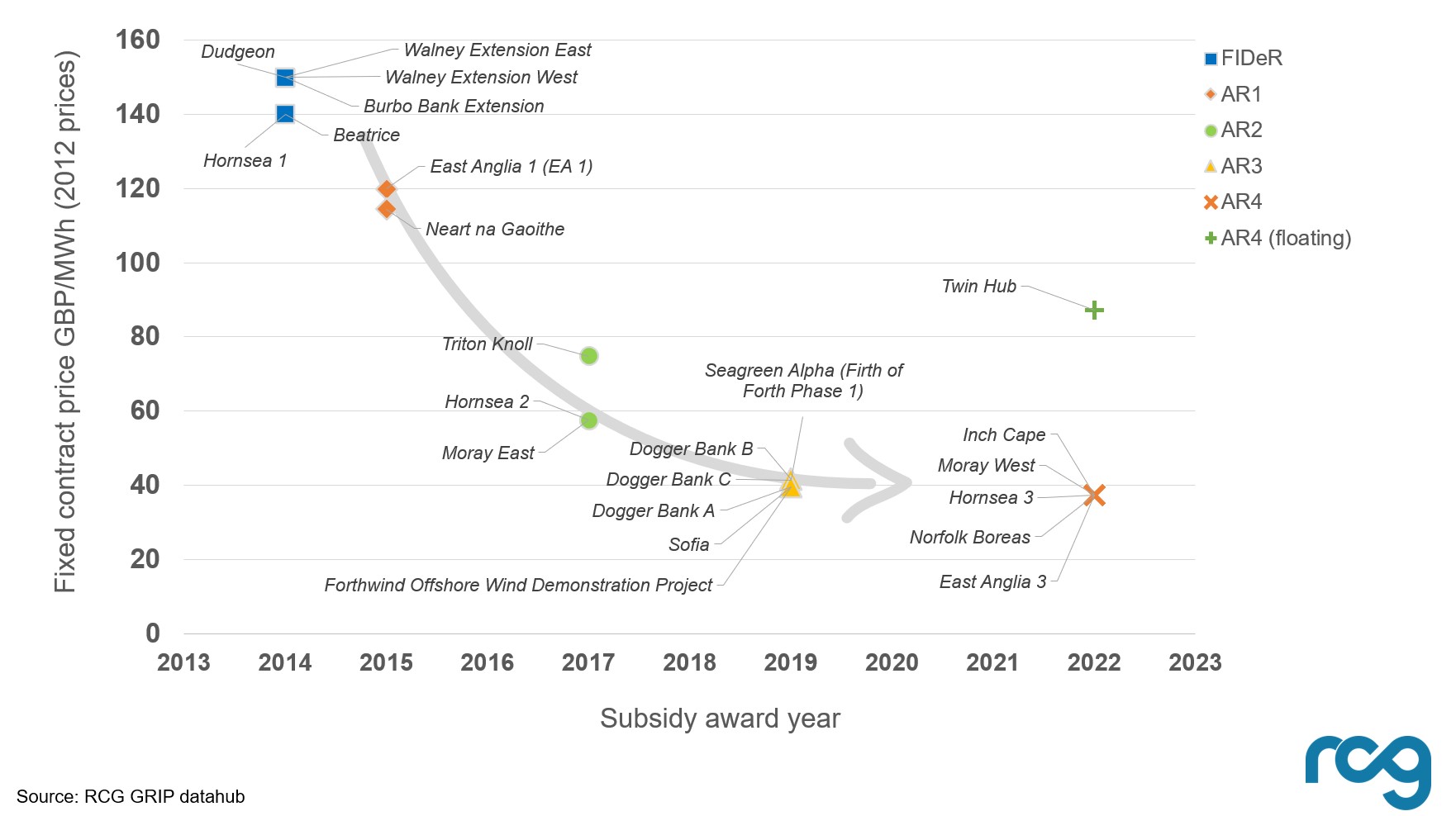 The only price outlier in the UK’s AR4 auctions was TwinHub at GBP 87.30/MWh in 2012 prices, or GBP 110.01/MWh (USD 132.25/MWh) in today’s prices, which itself is a notable achievement since it is a floating offshore wind project. While it may be a small project, it shows commercial success and that the cost reduction journey is well on its way for a technology that many have doubted in recent years could achieve either.

Since 2020, total global capacity of floating projects has increased by over 116 GW. Despite no single project of more than 50 MW being fully commissioned to date, increasing confidence in the viability of the technology has encouraged developers to propose multi-GW sites across all regions.

The success of floating technology will be nothing short of disruptive to the global energy landscape as coastlines previously considered off-limits for offshore wind will be ripe for development. In the United States, the typically cautious and slow US federal government is moving with uncharacteristic speed by specifically offering up dozens of areas to lease for offshore development for floating projects.

California’s auction is scheduled for this fall and could see over 6 GW of first phase projects awarded sites. The Gulf of Mexico offshore wind lease sale is expected to occur by Q1, 2023 and will include both fixed and floating sites with potential for around a dozen sites 1,000 MW or more auctioned. The lease auctions in the Central Atlantic are for both fixed and floating and expected to go forward in mid-2023. Oregon is scheduled for Q3, 2023 and could support around 3 GW in first phases. Lastly, the Gulf of Maine (which could feed power into populous Massachusetts) will be auctioned in Q3, 2024, with site estimates too unknown at this point.

So, yes, in the United States the EPA has been effectively stripped of its ability to strongly regulate CO2 emissions from power plants without regulatory action from a Congress notorious for disfunction and inaction. But in the meantime, the renewable energy industries have put into action the technology and cost advances that are seriously challenging the dominance of CO2 emitting fossil fuels now and for the foreseeable future, no matter what the EPA or the US congress do – or don’t – about it. 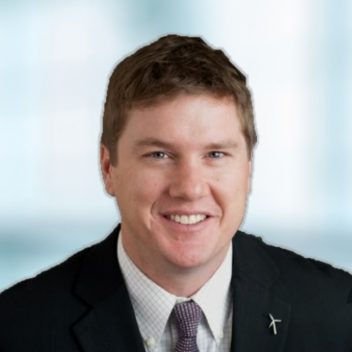