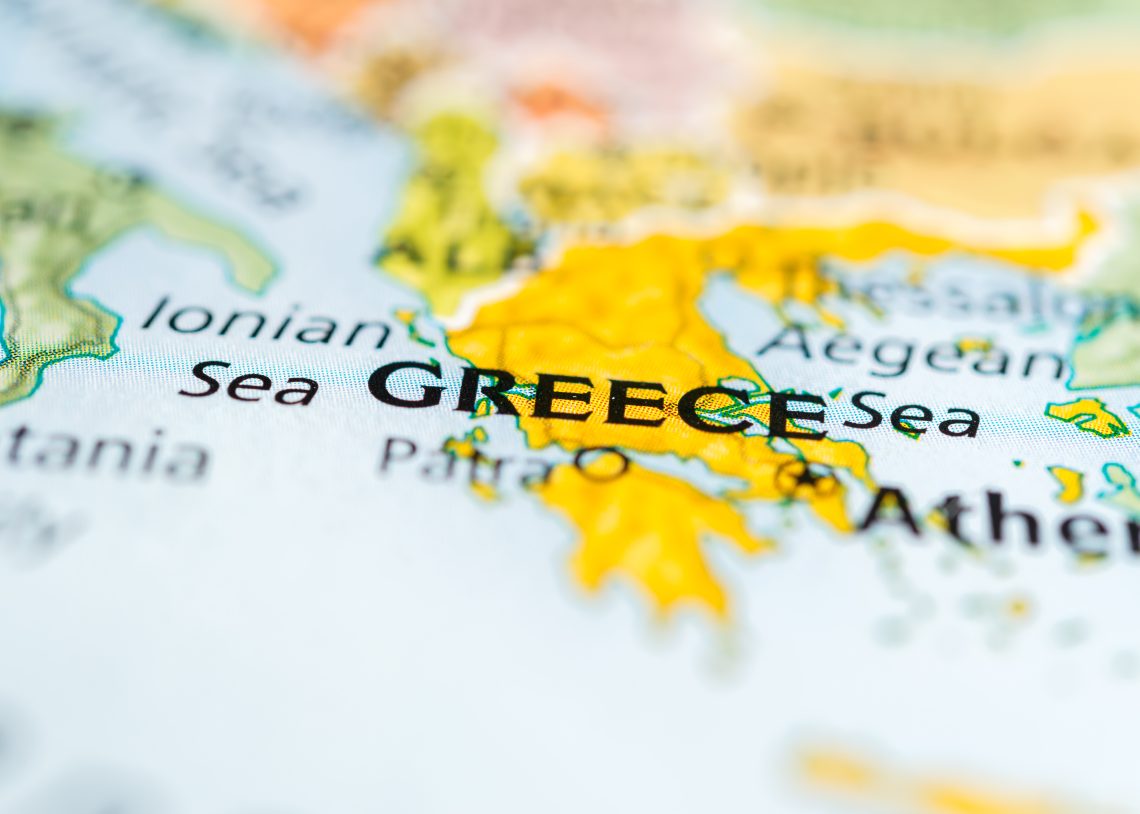 Greece legislators have signed into law the Offshore Wind Energy Bill, which lays out the steps needed for the country to achieve a target of 2 GW of floating offshore wind by 2030. The legislation is Greece’s first law pertaining to offshore wind and is a strong indication the country intends to meet its target of 35% renewable energy by 2030 established under its National Climate and Energy Plan.

The Bill stipulates that a national offshore wind program will occur after a strategic impact assessment has been finalized. Therefore, the government is expected to make more announcements specifying offshore wind zones and auction criteria.

Interested developers will need to secure state sanctioned permits to study selected areas. These “exploration” licenses (to identify wind resources, etc) will be valid for up to three years. Auctions for state support will be reserved for permit holders. Selected bidders will gain exclusivity to develop, build and operate in the selected areas.

The legislation introduces a Contract-for-Difference-type subsidy mechanism for offshore wind development. Each development area will be awarded to the bidder with the lowest bid for 20 years. Upon agreement, there will be a six-year period to complete a project.

However, some industry observers note that the Bill lacks detail and did not go far enough with specifics.

Vasilis Markatselis, Senior Associate, says some of the language contained in the legislation needs to be further refined to provide certainty to investors and developers.

“Some aspects of the legislation are vague,” he says. “Although the government has set a 2 GW offshore wind target by 2030, there is no such reference contained in the Bill.”

To send a stronger signal to the marketplace, Markatselis says the Bill should have indicated a subsidy cap for the first auction. Absent a scheduled series of offshore wind specific auctions, the development of offshore wind in the country could lead to delays and deter bidders.

Offshore wind projects in Greece were initially developed in the early 2010s before a period of dormancy which lasted until 2020, when a new marine spatial plan was implemented. Now Greece seems to be of interest as several international developers such as Parkwind, RWE, Ocean Winds and Masdar have expressed interest in pursuing projects in the market, along with local renewable energy developers.

Greece’s territorial sea currently extends to six nautical miles in the Aegean Sea leaving limited space for projects in higher wind speed areas. The Ministry of Energy and Environment has conducted feasibility studies to identify areas suitable for both fixed-bottom and floating wind areas and has determined that the seabed around Greece is mostly suited to floating wind projects as water depths drop significantly. 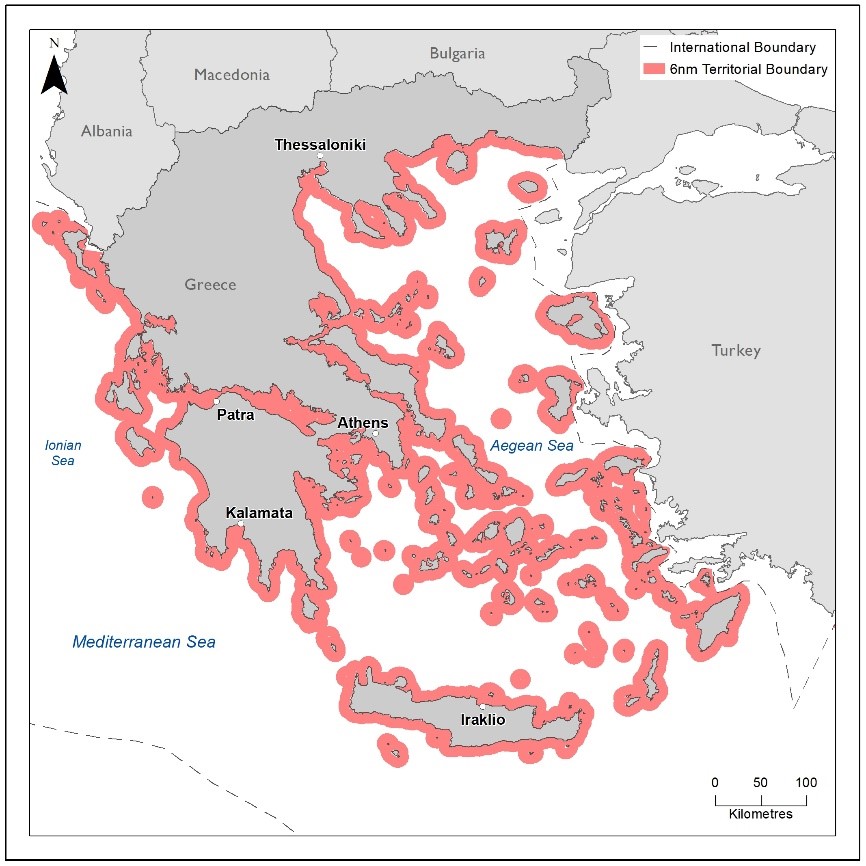 To date, two fixed-bottom projects owned by Mytilineos and COP -the 216 MW Thrakiki Aioliki and the 498 MW Kaveiria Offshore Wind Farm- have been awarded Production Licenses. However, the Bill does not include any reference regarding the Production Licenses or if the developers can exercise them. 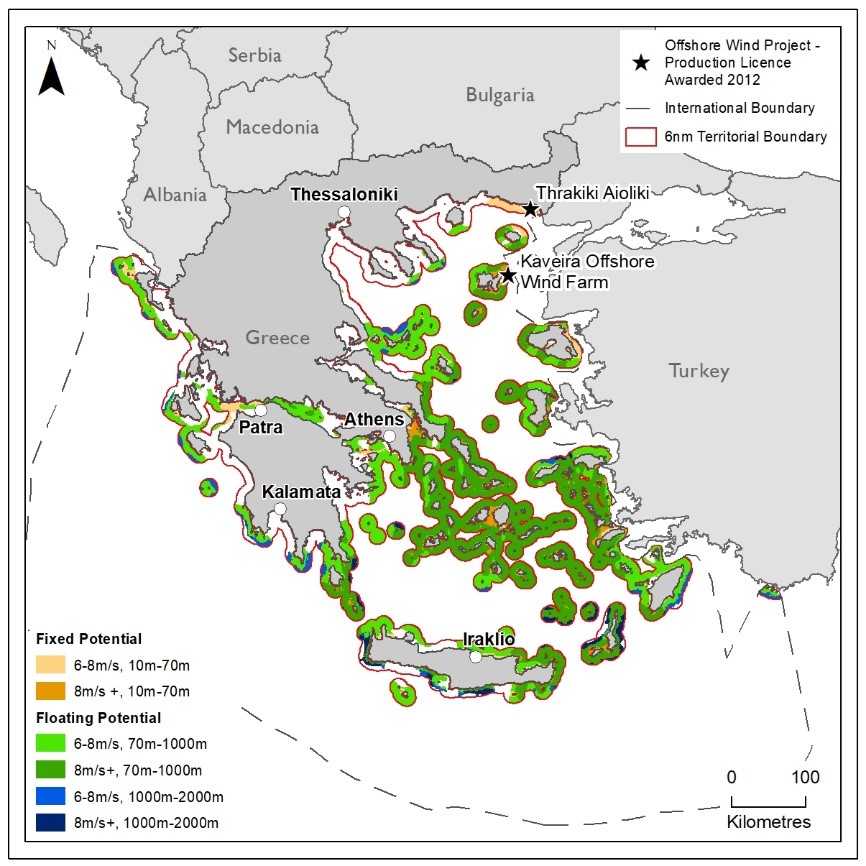 Exhibit: Bathymetry and potential for fixed and floating wind

“The main challenges are from visual impact and the nascent supply chain,” Markatselis explains. “There is no established offshore wind supply chain in Greece nor in any adjacent European market.” Therefore, he says, “the government will have to engage and understand the supply chain capabilities, identifying suitable ports for redevelopment and consider strategic investments.”

Markatselis notes further challenges that need to be addressed, specifically in grid connection.

The Independent Power Transmission Operator (IPTO) will be responsible for developing all offshore wind export grid infrastructure and interconnection and the cost will be socialised toward the system usage charges.

Some industry watchers may speculate that Greece is taking its cue from Germany, the first country to propose a centralized approach.

“The approach has more advantages in terms of system integration and security of supply, when compared to a developer-led approach,” explains Markatselis. Notably, this endeavor appears to facilitate IPTO’s plans to connect all non-interconnected islands with the mainland’s grid, having a more holistic grid infrastructure. However, the centralised approach relies on the experience and capacity of the TSO in executing these infrastructure projects in the required offshore wind development timeframe.”